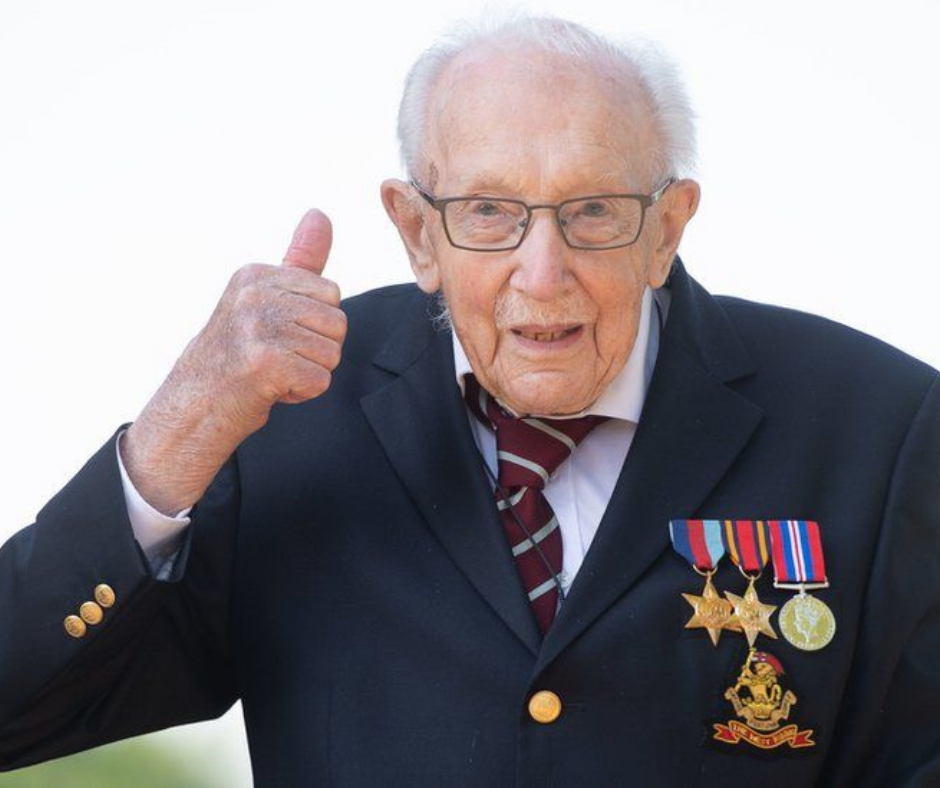 Landmarks across the United Kingdom were lit up and flags were flown at half-mast earlier this month following the death of Captain Sir Tom Moore.

Captain Tom captivated hearts across the world when in April 2020, the then 99-year-old army veteran set out to raise £1,000 for British health care workers by walking 100 laps of his garden. As the UK struggled through its first lockdown, Captain Tom’s story provided a good dose of joy and he proved to be someone that the public could get behind and cheer on.

It certainly didn’t take long for Captain Tom’s efforts to go viral, and by the end of April 2020, having received donations from more than 1.5 million supporters across the world, Captain Tom had raised an extraordinary £33 million and was an internet sensation!

As a Brit, I can’t help but swell with pride whilst thinking about the life of a man that inspired so many. In what would be some of the darkest days in Britain’s post-war history, Captain Tom was a cheerful beacon of light and an inspiration for millions.

Captain Tom’s life and his story has got me thinking about legacy this week. What does it mean to leave a legacy, and how is a legacy left?

When I think of the meaning of a legacy, I can’t help but feel that it is so much more than tangible achievements. To me, a legacy is informed by the investment of time and passion, the commitment to values, good attitude, contribution to and engagement with the world in which we all live.

A legacy can be informed by time spent mentoring future generations and the passing down of knowledge. It can be informed by commitment to causes and work undertaken to improve the world in which we live. Leaving a legacy doesn’t require wide-spread change – to leave a legacy requires only one person to take inspiration from our actions and seek to improve themselves in some way.

Intrinsic to leaving a legacy I think, is to leave the world in a much better place than the one you arrived in.

In the catastrophic year that was 2020, across the globe we saw the best and the worst of humanity; from the grocery hoarders to exhausted nurses sleeping in hospital doorways. We listened to reports of families saying their last goodbyes to loved ones through the telephone, as we ran errands for the elderly and the vulnerable in our communities. We saw the Venetian canals run clear, as we collectively shook our heads when one of the world’s most powerful men refused to wear a face mask in public.

Whilst Captain Tom left the world during a dark and devastating moment in history, I feel he has left a legacy which personifies human nature at its very best. During a time when people across the world were under strict instructions to stay apart, Captain Tom managed to unite us all through old-fashioned determination and good spirit.

To me, Captain Tom’s legacy serves to remind us of what can be achieved when we all come together, and all show some kindness to each other. That in itself, is a legacy that I hope will endure many years, don’t you?